Give us our daily bread

I don’t eat bread often, but when I do I prefer a sourdough bread made with stone ground flour and I just loved the Pear and Rosemary french toast. I do have a gluten intolerance but my gut seems to cope well when I eat stone ground flour.  Have you read the ingredients list on a loaf of bread from the supermarket?  Why do they add so many ingredients if a traditional bread only contains 4 ingredients; water, flour, yeast, and salt?

Start taking responsibility for your health by reading labels. The commercial baker has one agenda and that is to make money and produce a lot of bread as quickly as possible. They don’t have time to let bread ferment for 4 hours. That is why they add preservatives and ‘super gluten’ to hurry up the process. So you can imagine our bodies do not cope very well with that.

Bread is such an integral part of so many cultures diet’s and really is a world staple. But you need to listen to your body and learn what type of bread in whatever form or made from whatever grain is your daily bread.

What is the hype around sourdough bread and stone ground flour?

The term “stone ground” refers to the way that manufacturers grind wheat kernels to create flour. Rollers heat up the flour, which kills most of the vitamins. The high temperatures also cause the oils in the grain to turn rancid so flour created using a roller will spoil faster than stone milled flour. Stone-ground flours are thought to be more nutritionally sound because they contain the germ and bran.

Sourdough is more digestible than normal yeast-based bread and more nutritious too. Lactic acids make the vitamins and minerals in the flour more available to the body by helping neutralise the phytates in flour that would interfere with their absorption. The acids also slow down the rate at which glucose is released into the blood-stream and lower the bread’s glycaemic index (GI), so it doesn’t cause undesirable spikes in insulin. They also render the gluten in flour more digestible and less likely to cause food intolerance. So if you wondered what bread is better for you, now you know. My favourite stone ground flour is Eureka Mills try them out, they are already stocked in most supermakets and health shops.

The whole wheat loaf I used for my Pear and rosemary french toast came with my munching mongoose order. Baked by a local artisan baker. I just had to turn it into french toast and the organic pears, so perfect and sweet were a match made in heaven.

Make sure to add vanilla to the egg and milk mixture if you want to go in a sweet direction with your flavours. Also, don’t leave your bread soaking for too long in the egg and milk so it gets too soggy.  Make sure your butter is sizzling hot when adding the bread so you get a nice brown colour and some caramelisation going.

I fried the pears in a little butter until golden brown and then added honey and the rosemary. If it is not quite saucy enough add some more butter and honey.

Stack the french toast on a plate, place pears on and drizzle with honey sauce. Scatter with toasted almonds and serve with Greek jogurt. Enjoy!

For the pear and rosemary sauce

Hi, I'm Ankie! Welcome to Wooden Spoon Kitchen, my pantry of life, love and health where we constantly stir laughter, learning, eating and cooking together!

These nutbars are so delicious and easy to make. They require no baking and are… 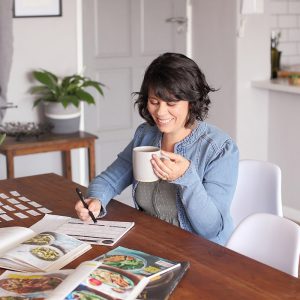 Hi, I'm Ankie! Welcome to Wooden Spoon Kitchen, my pantry of life, love and health where we constantly stir laughter, learning, eating and cooking together!
Blog post
Back To Top